Wow, busy day!  After a 5-hour drive, I made it in the nick of time to the North Carolina Woodturning Symposium located at the Greensboro Coliseum.  The first session started mere seconds before I walked in the door. 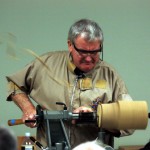 Stuart Mortimer showed us a demo on how to make a twisted hollow form.  He uses the lathe, a grinder, a hand plane, a rotary tool, and sandpaper to achieve the forms he creates.  He also showed us how to make a finial with the same technique. 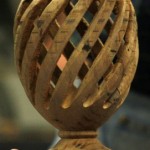 The piece of wood he was working on above was turned, measured, drawn on, cut, hollowed, planed, and sanded until he had this rough form.  What would have taken me 6 weeks, 2 emergency room visits, and 3 trees to come up with, he was able to whip out in less than 1.5 hours.  All while teaching a room full of folks how to do it ourselves!

Later in the day, I ran across some of his finished work in the Instant Gallery.  Very impressive work. 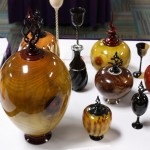 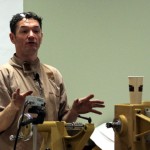 The 3pm session was Stuart Batty with the bowl gouge.  I took a 3-day class from Stuart last year, and he is an excellent teacher.  When he gives a demo, he goes over several basics that a beginner needs to keep in mind.  He says he prefers teaching folks who haven’t been turning for long since there are no bad habits formed yet for him to have to break.  He says “practice makes permanent” , meaning the more you practice doing it right, the more likely you are to not fall into some of the pitfalls that people fall into while turning.  Some of the pitfalls he talks about aren’t really ‘wrong’, just more work to accomplish a goal that can be accomplished easier.  Since he turns several hours a day, he finds it very important to turn with as much ease as possible. 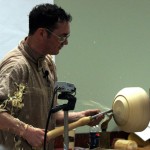 He went over some basics of turning in what he considers their order of importance.

I remember last year Stuart talking about working on his own line of tools.  I wonder where I might be able to find out information about that sort of thing?

After the demos, I took a wander around the vendor area.   Someone send me a blank check so that I can pick up some of those burls! 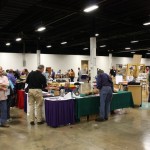 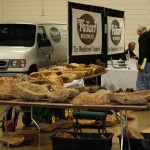