Quite a while back I turned a Wall St. II pen out of 1/2 a blank of buffalo horn. Within days, an unsightly split formed up the side. I wrote this off to it being too hot, cold, dry, or some incompetence on my part. Little did I know that it is most likely the buffalo itself working against me!

Since that time, I’ve held onto the other half of the blank until I could determine what I’d done wrong with the first one. I hated wasting such a nice (and expensive) material! Back in February, i started turning the other half of the blank. (It was the blank with the glue gunk in it from my previous post.) I had stabilized it prior to the February post, and it has sat in my basement partially turned now for a little over 2 months. If it were a bowl blank of the same thickness, it would be ready for final turning now.  The picture isn’t great, but the split in the unfinished pen is the black gap.  The white line is actually the coloring of the horn itself, not an indication of splitting.

I’m hoping that this one won’t split, as I’ve made a pretty slick looking gunmetal bolt action pen from it. However, my research online leads me to believe that buffalo horn splits. Period – and that there’s pretty much nothing that can be done to prevent it. I suppose I’ll put this one on my Etsy site with a disclaimer about the material type. :(. Maybe a combination of things I’ve tried will prevent it from splitting. I stabilized it, used Titebond as opposed to CA to glue the tube in (I believe it to be a more elastic and less brittle glue), and I used EEE wax to finish it. I think the wax may help hold any residual moisture in the material – or at least let it dry more evenly. Those, combined with sitting two months prior to turning, will hopefully yield better results than my first attempt! 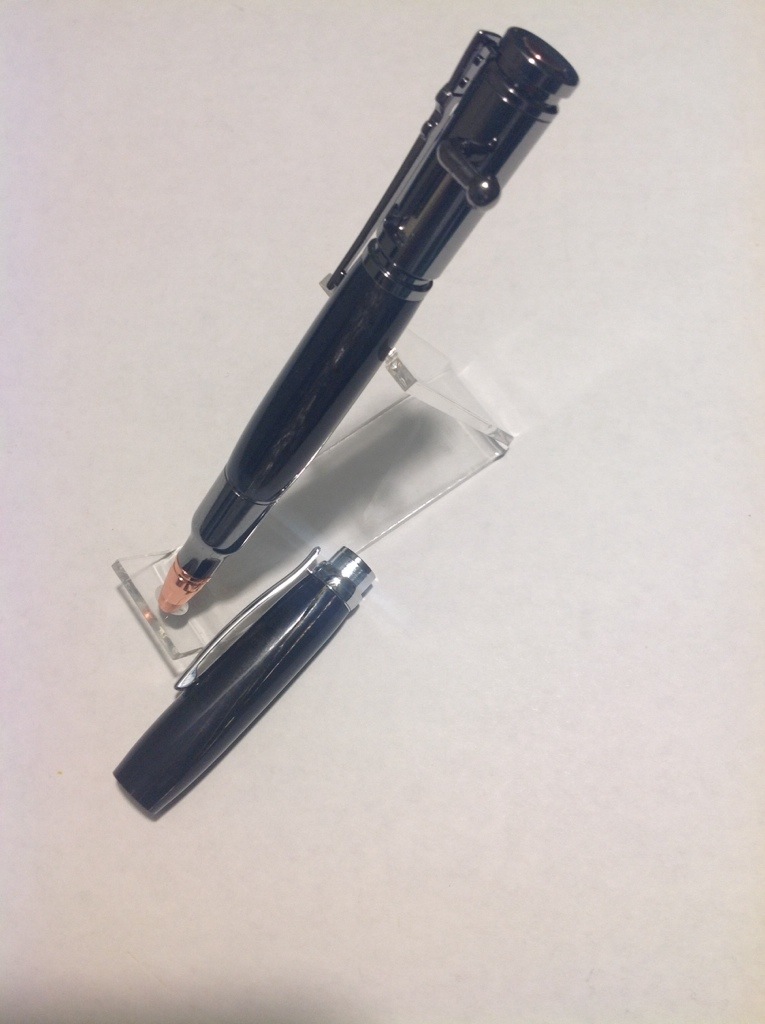